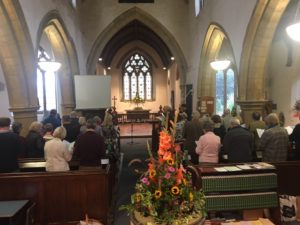 Like our two sister churches people from across the benefice attend our range of services.  Our family service is at 9:30 am on the third Sunday of the month, where breakfast is served from 9:00 am.  Our other services are at 5 pm and offer different experiences; they include, songs of praise, evening worship and BCP communion.  We offer a warm welcome to newcomers.

Seagrave Parish Church is a Grade II* listed building.  Only 4% of listed buildings in England are of this status and are classified as particularly important buildings of more than special interest.  Members of Seagrave Church PCC are very active in a organising a range of activities that raise funds to assist with maintenance and the enhancement of facilities.  The are also involved in various village fund raising activities.

The parish of Seagrave which has lived in relative seclusion over the centuries has a church with a history, like that of the village, which can be traced back to Saxon times.  It is dedicated to All Saints, which tends to be a 13th century dedication, but parts of the fabric pre-date this by some two hundred years.  It is highly probable that the church occupies the site of the Saxon church which served the existing village.  The font is late Saxon / early Norman. The communion table is of especial interest being a Mensa (three of the consecration crosses are still visible) though it is thought to date from much earlier than medieval times.  Other items of interest are the early musical instruments and the chancel windows – the south one being of beautiful Murano glass and its opposite in the chancel north wall contains a mistake.  Try spotting it if you come to visit the church!

Seagrave, never having ‘suffered’ the consequences of excess wealth, the church remains plain, unadorned and much as it must have been when the rood screen, wall paintings and other decorations were removed at the Reformation.  Twentieth and twenty-first century alterations make it much more convenient for the needs of modern congregations.

Further architectural details are provided by Pevsner and may be accessed on the Charnwood Listed Buildings web site.

Detailed records of Rectors (since c1180) and of Baptisms, Marriages, Burials etc. (1690 – 1910) are available on the Seagrave Village web site. 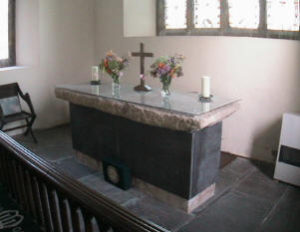 Stone mensas were removed, and in general destroyed, at the time of the Reformation.  After that time it was no longer permissible to make Communion Tables from stone.  Seagrave’s mensa had been thought to be a gravestone but was discovered against the east wall of the chancel by the Archdeacon of Leicester, Ven. R B Cole.  It was restored to its present position in 1974.

The late Saxon / early Norman font is the oldest part of the church and is set on the recently refurbished floor.  It is described by Pevsner as “Circular Norman font, blank arcading with colonettes carrying segmental arches.” 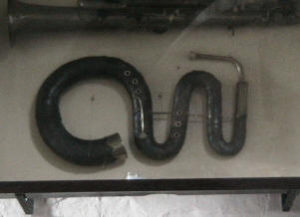 The Serpent is a 16th Century musical instrument.  The two sets of finger holes are just visible on the centre portion of the instrument.  The serpent and the ophicleide were in regular use for church music for many years.  A demonstration of the Serpent being played is available on YouTube. 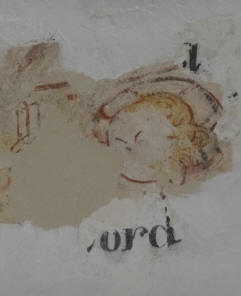 During recent renovations (August 2013) a piece of plaster fell off the north aisle wall revealing mediaeval painting. A haloed head is clearly visible, with a representation of hair – yellow ochre with red drawing of rolls and curls – that is typical of the late C13th / early C14th period. Wall paintings illustrating biblical scenes were routinely destroyed or whitewashed and over-painted with scriptural texts as part of the Reformation movement in the mid C16th. Traces of such text in black lettering are clearly evident. 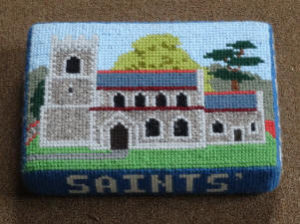 The large array of tapestry kneelers made by villagers is a feature of the church.  These include a number of unique designs relating to the church and village.